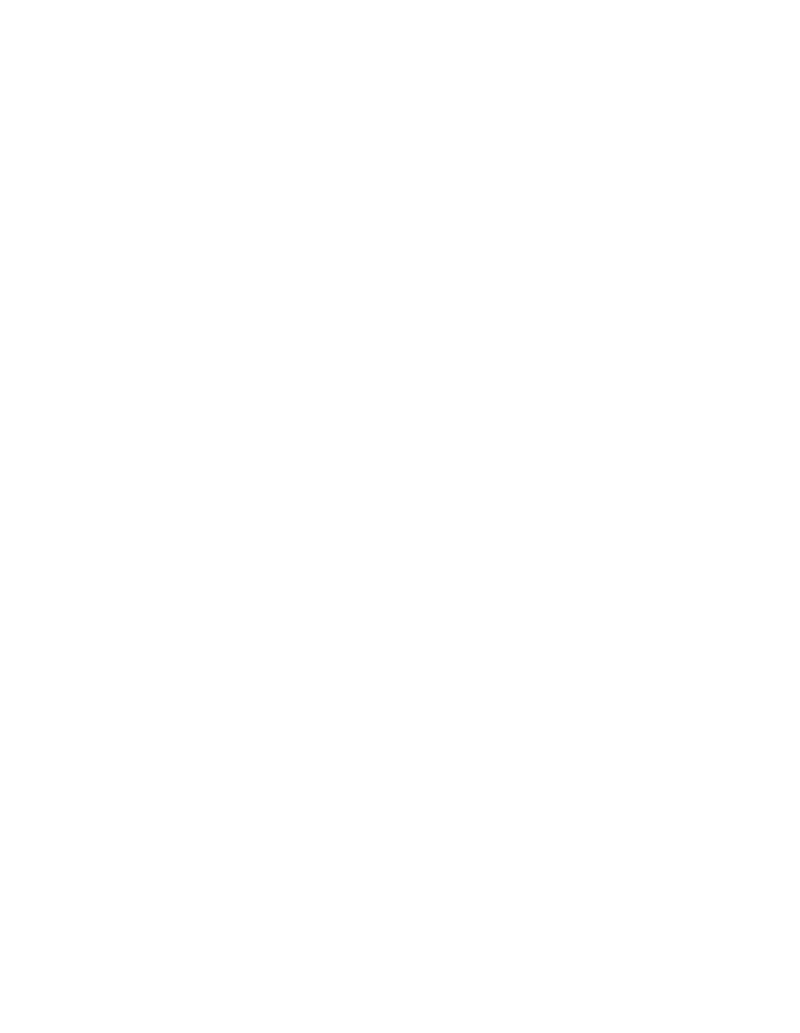 My cell phone chirped on the car seat next to me. I knew I should answer it, but I wasn’t familiar with the small device. The headlights bored a hole in the early morning darkness heading south on Idaho Highway 95 as I fumbled for the phone with one hand while steering the car with the other. This was before TU’s official policy against driving and dialing, but multi-tasking has never been my strength so I pulled over to a wide spot.  It was August 2004 and I was driving to Boise to meet with my co–worker, Jeff Barney. 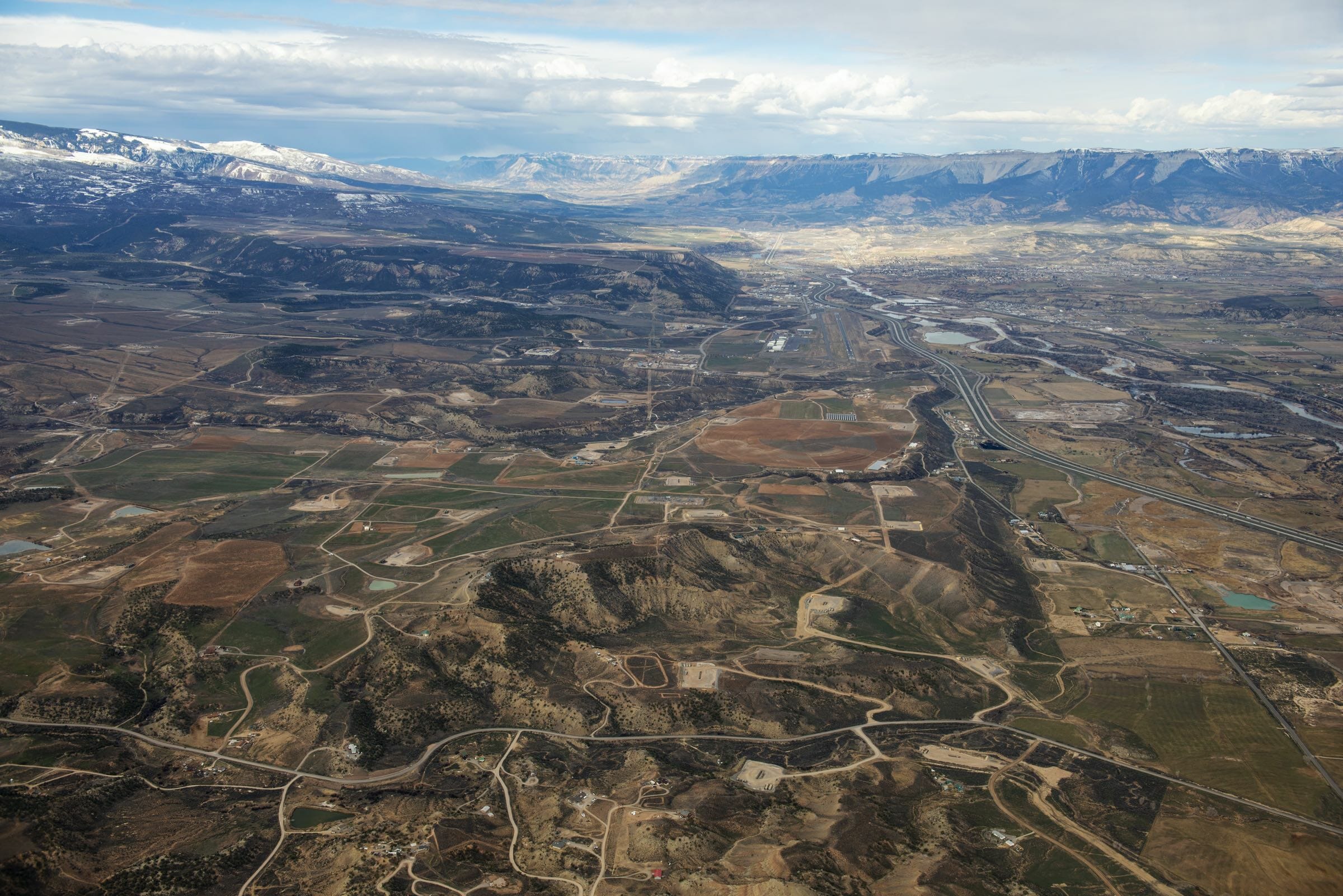 Oil and gas development became a predominant use of many thousands of acres of public lands in the West in the beginning of the 21st century.

“Hello?” I said, untangling the charge cord from the shift lever.

“Stouder is that you?” a static-laced voice asked. It was Dave Stalling, my other coworker calling from Missoula, Montana. The three of us had been hired that spring by Chris Wood to form TU’s new program for headwaters protection. Our charge was to help organize anglers and hunters to protect public lands. Barney was working on mining issues. Stalling on oil and gas development. I was tasked with furthering protection of America’s roadless lands.

“I’ve been working on this LTE for The Missoulian and I need some advice.” I cringed.

For a few seconds I sat in the dark and thought, What’s an LTE? I was afraid to ask and show my ignorance. Then I got it! Letter To the Editor! Of course! 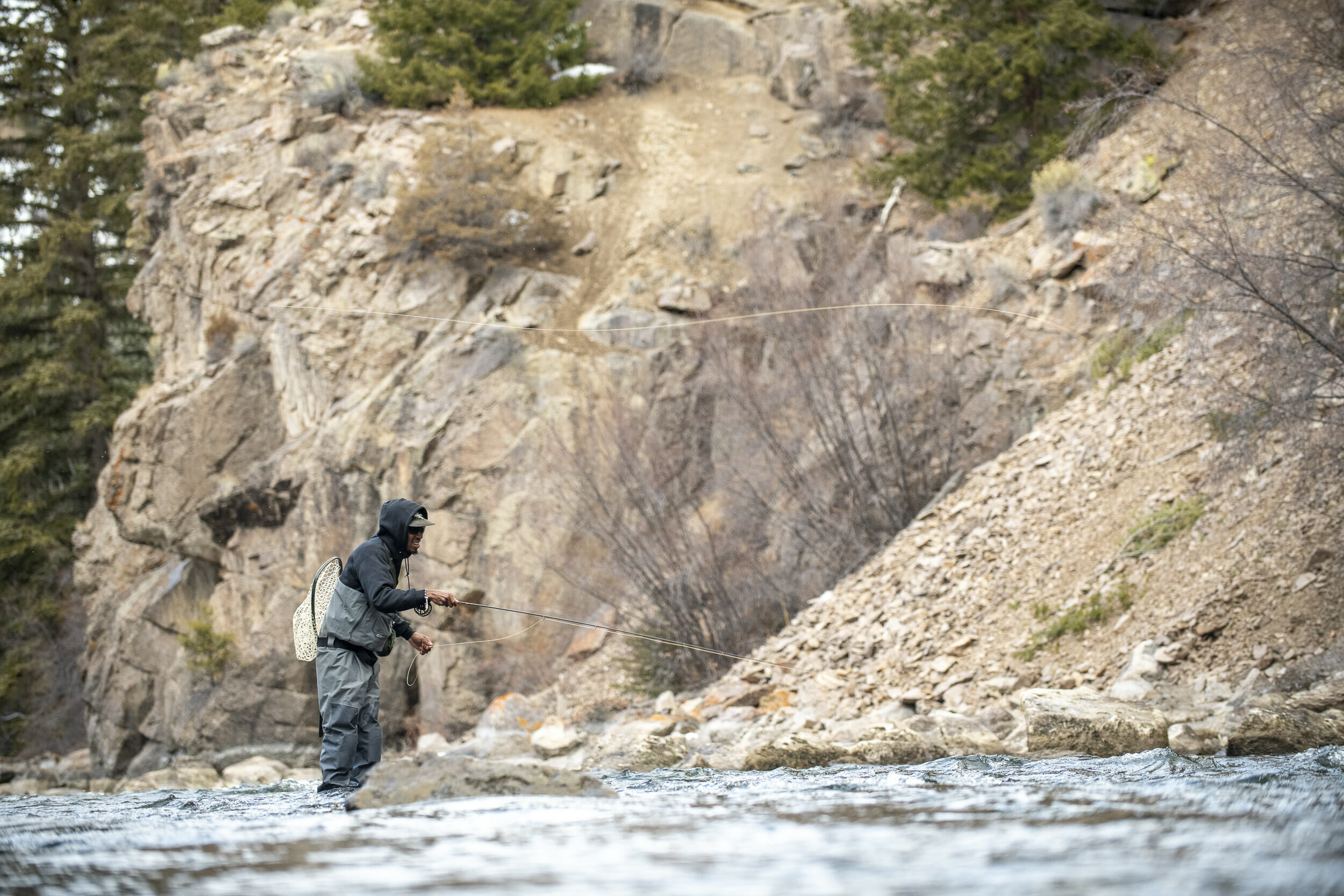 Hunters and anglers are critical to conservation throughout the country.

None of us had done this work before, but then no hunting and fishing groups had really raised the banner of public lands before. Never thought it was needed. In the American West we’d hunted and fished whenever and wherever we could carry a rifle or a fly rod. We simply took public land for granted. There was enough room for everybody. Why worry if you showed up at your favorite spot in the fall and it was filled with oil rigs and laced with new roads? Just go somewhere else. There was lots of room. But by the 2000s that carefree era had passed and we’d run out of “somewhere elses.” As hunters and anglers, we were standing on the sidelines watching the battle over timber, energy and minerals defined by environmental groups, industry and their politicians. If we wanted a place at that table, we were going to have to push our way in and speak up for those privileges. And we couldn’t rely on other groups on the left or the right to speak for us.

Though in a new century, the 2000s were a culmination of the extractive industrys’ reign of the 20th century. The years before had seen America’s perception of public land change through awareness of new values circling around extraction industry politics and lawsuits. And we were all learning new words for clean water, heathy ecosystems and multi-use recreational and wildlife areas. Hunters and fishers were just tossed into categories to bump up numbers for others. The good news was that wildlife, land and water protection still had a place at the table. The bad news was that table was filled with those who wanted to use hunters and anglers to further their own agendas. By 2001 with a changing administration we saw the see-sawing struggle between extractive and environmental interests that had gathered momentum in the ’80s and ’90s finally settle down some. Under pressure from industry and political backlash, the Bush Administration, in 2005, decided to “let states decide the fate” of the National Forest roadless lands within their state boundaries. And “energy independence” was on the lips of every politician in America. It seemed obvious to the new administration that consumptive interests like logging, mining and energy would be decided on federal lands from those dependent on local jobs and taxes. The “Federal Government” was too abstract and remote in the minds of rural communities still reeling from the timber wars of the 1990s and a huge human population influx into their surrounding public lands. “New” values like clean water, air and abundant wildlife were replacing old money-making activities like clear-cutting, mining, grazing, oil drilling and dam building. 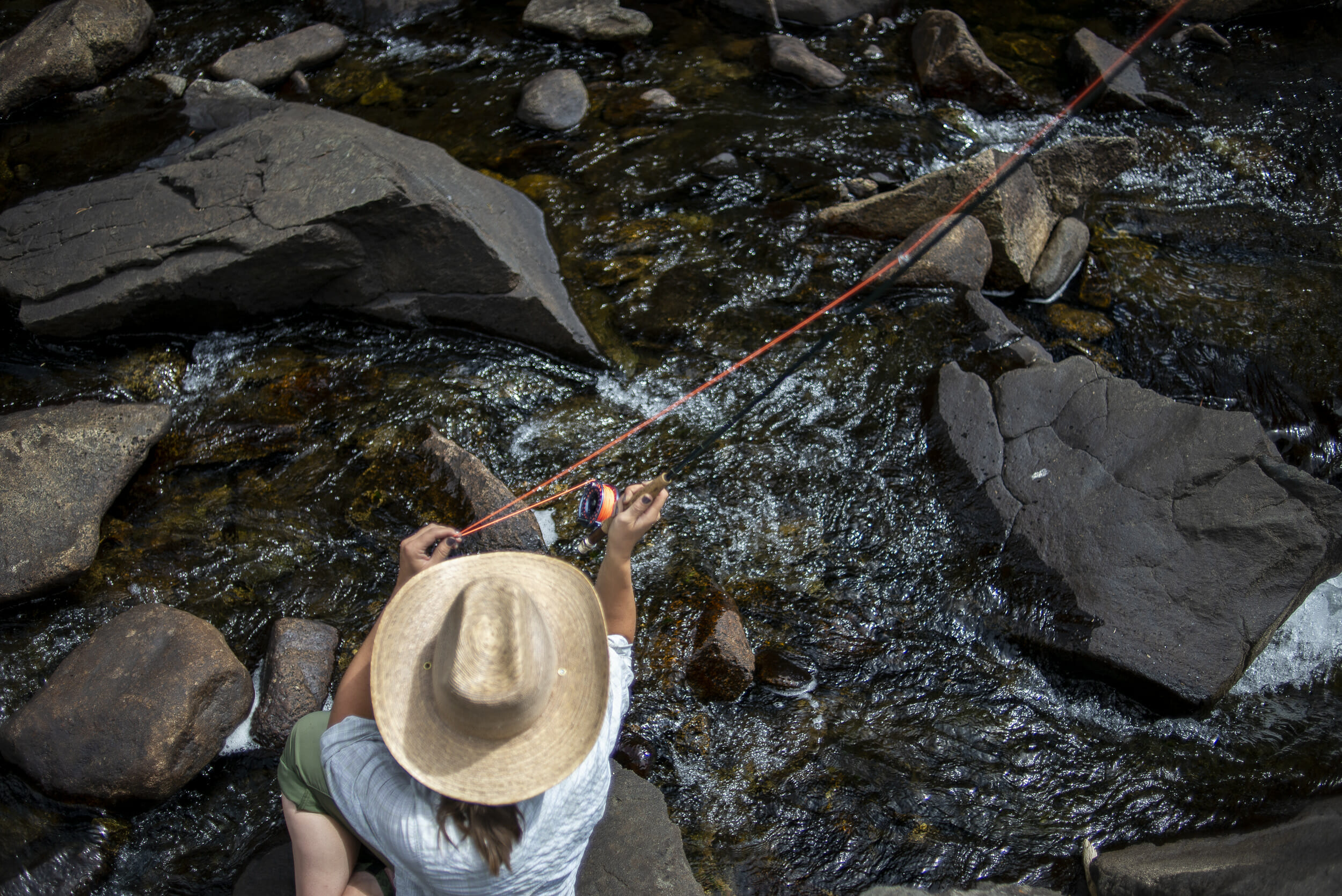 Fishing in a remote stream in Wyoming.

It also became quickly obvious to us that TU’s fledgling public lands trio needed to grow up and meet the needs of conservation by bringing hunters and anglers into this movement to help guide these “new” public land and water values. The three of us were trying to understand folks scattered across 50 states with conflicting political interests and widely divergent geography and cultural values. With growing internet presence and an exploding social media influence we simply couldn’t be everywhere we needed to be fast enough. We needed staff and we needed a corps of anglers and hunters.

“We need organizers in each state with active gas and oil drilling, mining damage and large roadless holdings,” Chris Wood pointed out in a Boise TU meeting in 2004. He wasn’t just moving his lips. He had a plan. In a past life both Dave Stalling and I had been outdoor/conservation writers and we were still active with folks in the genre. “You guys know these people who are passionate about these areas and issues. Start talking to them about coming to work for Trout Unlimited to protect public lands in their states. I’ll go out and raise the money to get it done.” 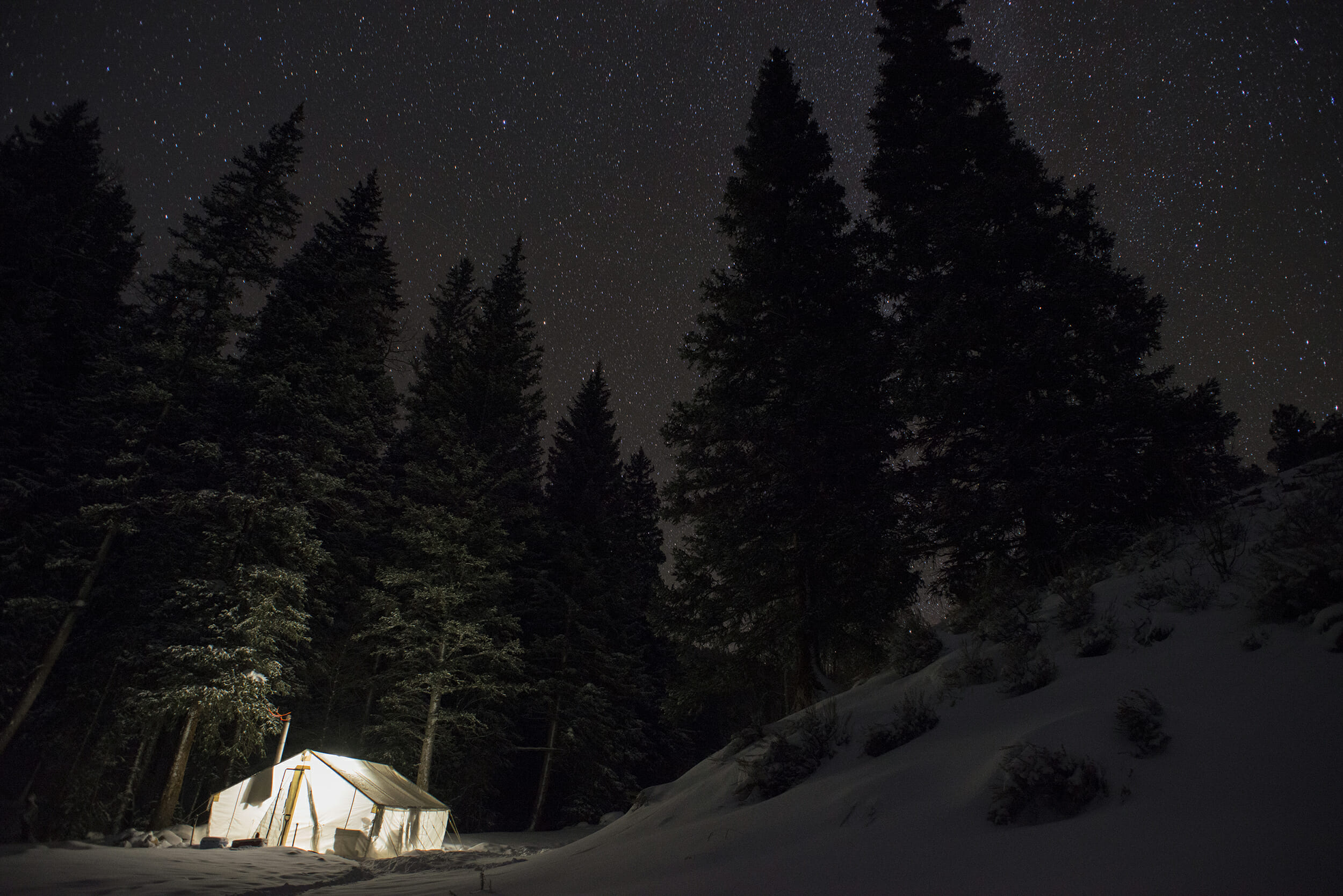 That was the spark that ignited what is today’s work by Trout Unlimited to protect public land. Some of the most effective conservation/outdoors advocates in the country were hired starting only a few months after the first of us in almost every state including New Mexico, Arizona, Colorado, Utah, Wyoming, Nevada, California, Alaska, Oregon, Washington, Idaho and Montana.

This was the birth of what has become widely known as the long-awaited return of anglers and hunters to conservation. Of course as I sat in the pre-dawn darkness alongside that deserted Idaho highway in 2004 trying to untangle the cord of my newly purchased (and first) cell phone and struggling with the definition of “LTE” I couldn’t know how critical this effort would be in following two decades to the protection of America’s public lands and water. Nor could I imagine how our fledgling effort would grow ten-fold in staff. Nor could I see ahead to how existing conservation organizations and later-formed hunter/angler organizations would pick up the public lands mantel and join the fight.

Nearly twenty years later, I have retired with my wife, Holly, to our mountain land outside Riggins, Idaho, and I look back on the legacy of our work: the protection of millions of acres of roadless lands across the West, oil and gas withdrawals in places where we thought we’d never have a chance, thousands of miles of trout stream and river with lasting protections. And, just as important, the return of the angler-hunter to the roots of conservation at long last. 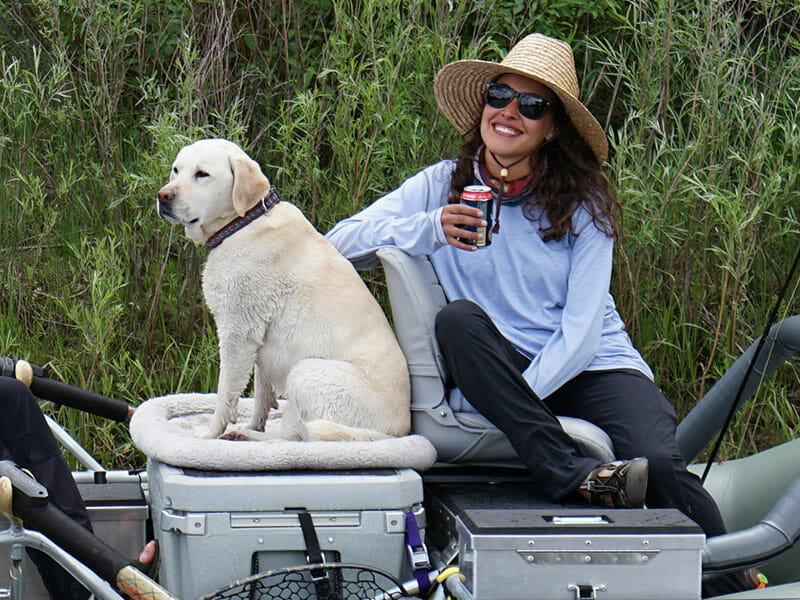 Two big states had one big impact on Liz Rose’s path to a career in conservation. One state—Alaska—is blessed with millions of acres of public land that anyone can enjoy. The other—Texas—has a dearth of public land and the common path to enjoying the outdoors on a consistent basis is to join a duck club or a dove club or get on a wait list to join a deer club; in other words, spend thousands of dollars for a privilege. It was a sharp contrast. Rose, who grew up on the edge of California’s Santa Clara Valley, farming and ranching in her blood, first went to Alaska with a college boyfriend, driving the long road north and camping out in a summer adventure of a lifetime. Alaska’s rich natural resources—rivers stacked with fish, mountains piercing the sky, forests stretching like an endless blanket—captivated her. She knew she wanted to get back there and figured one way to do that was to work in the oil and gas industry, putting her geology degree in action. The geoscience jobs were all in Houston at the time so Texas oil field service companies would have to serve as stepping-stones to something better eventually. But Texas’ lack of outdoor opportunity and this career path didn’t sit well and before long, Rose was in school at the University of Colorado pursuing a degree and a career in environmental policy—part of her family is comprised of attorneys— and enjoying Colorado’s public land and open spaces.

Rose, who had spent many summer vacations at the family cabin on the banks of the Sacramento River knew instinctively how important public lands were in shaping her land ethic. Thus, two factors propelled her into conservation as a career. The first was the aborted attempt to sell off public land in the 115th Congress when then-Congressman Jason Chaffetz introduced HR 621. The second was having spent a bit of her career within an industry that actively pursued the weakening of environmental laws as a matter of course. She knew she wanted to work to conserve and protect.

Today, Rose is TU’s Wyoming Field Coordinator, working on a host of issues from oil and gas development, to wilderness, to public land management, having started in January of 2020. She spent much of her first months working in the Wyoming Legislature to ensure that good decisions to protect public lands, wildlife and fisheries were being made. “One thing I think is pretty cool about Trout Unlimited is how we scale. We can work from really local-scale projects on tiny streams that hold important native fish, all the way up to huge things like trying to take out the dams on the Lower Snake River. It’s an honor to be a part of.”